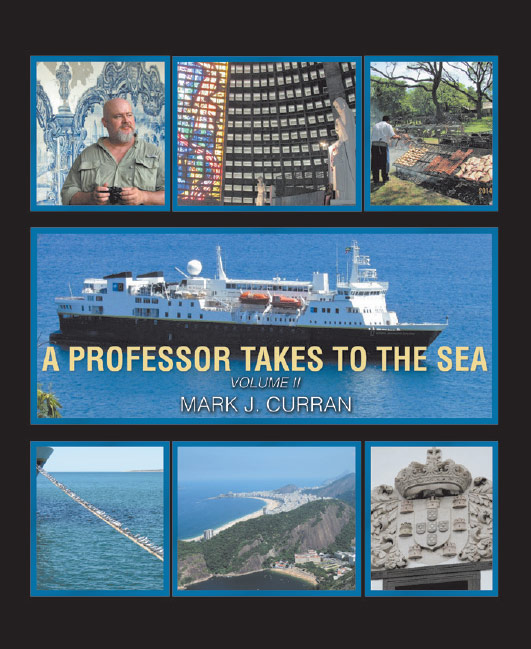 A Professor Takes to the Sea: Learning the Ropes on the National Geographic Explorer, Volume II, 2014 and 2016, continues Professor Curran’s experiences on board this great expedition ship. No longer a rookie but almost, Curran recounts early efforts to join the ship crew, staff, and guest speakers on a return trip from Salvador da Bahia to Buenos Aires in 2014 (with an Atlantic Crossing from the Cape Verde Republic thrown in) and the 2016 “Atlantic Odyssey 108” trip from Ushuaia, Patagonia, to Madeira with surprises in tow. Secondly, the book details Curran’s contributions of speaking of Brazilian and Portuguese culture and preparing the guests for the places to be seen in Brazil and Portugal’s Madeira. And as in volume I, it details the trip itself “At Sea” with the focus on educational talks by guest speakers and recaps by the naturalists and “On Shore” with cultural and historical vignettes of the places visited.

Mark Curran is a retired professor from Arizona State University where he worked from 1968 to 2011. He taught Spanish and Portuguese and their respective cultures. His research specialty was Brazil and its “popular literature in verse” seen in the story- poems of the “literatura de cordel.” Articles in research reviews as well as sixteen books deal with this folk-popular literature and its relation to Brazilian literature and history. Other books done in retirement treat subjects from Spanish Civilization, Latin American Civilization and Luso-Brazilian Civilization in the series “Stories I Told My Students” - books on Guatemala and Mexico, Colombia, Spain and Portugal and especially Brazil. Autobiographical books represent a change of pace from academia, “The Farm” and “Coming of Age with the Jesuits.” A seminal year of research made fiction is seen in “Letters from Brazil” and now Curran recounts a wonderful retirement “gig” on the National Geographic Explorer.