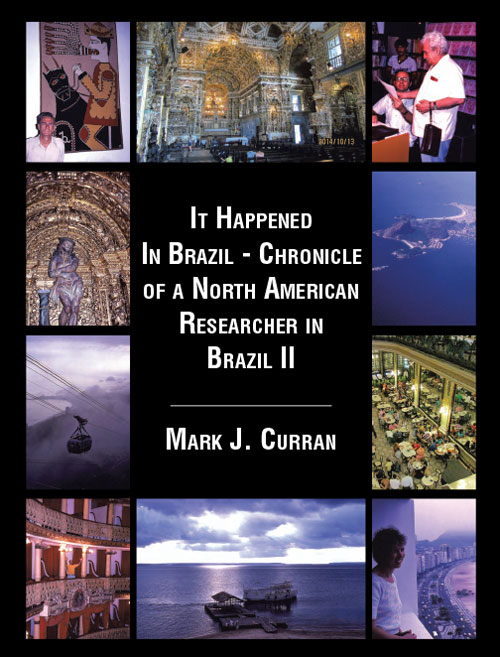 “It Happened in Brazil: Chronicle of a North American Researcher in Brazil II” is the English version of “Aconteceu no Brasil: Crônica de um Pesquisador Norte - Americano II.” The book is a continuation of the first volume in the series published in 2012 in both Portuguese and English: “Adventures of a ‘Gringo’ Researcher in Brazil in the 1960s.” It continues Curran’s love affair with Brazil and the Brazilians and work in Brazil from 1969 to 1985; a third volume to be published in coming years will bring everything to the present.

This volume deals with various researches and travel trips to Brazil, the author now professor at Arizona State University. Themes will be continued research on the “Literatura de Cordel,” conferences, important moments with authors of “cordel” and Brazilian Literature, the odyssey of publishing in Brazil, journeys to new parts of Brazil, and fine moments of tourism with wife, Keah.

Among academic moments and high points will be 1973 and the “First International Congress on Portuguese and Brazilian Philology” in Rio de Janeiro where the author is introduced to the Luso-Brazilian Academic World and especially in 1981 when Curran took part in the “50 Years of Literature of Jorge Amado” Commemoration in Salvador da Bahia. Among other memorable moments over the years was the trip with wife Keah to Brazil in 1985. The occasion was to receive a literary prize combined with new tourism to various parts of the country.

Written in the spirit and style of the genre of “short chronicles” in Brazil, the book will comment as well on the political, economic and social scene over the years and will note the many changes in the dynamic Brazil of the late twentieth century.