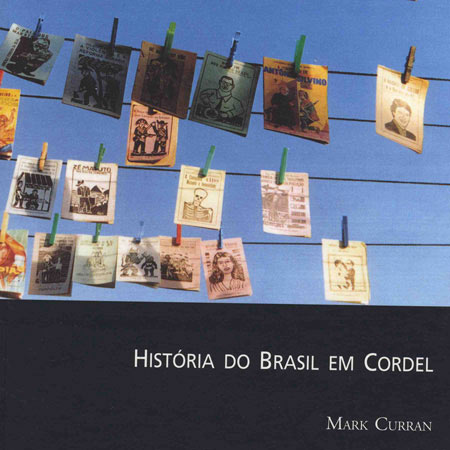 Professor Curran’s latest book takes a different tack.  Its thesis is that the news stories from Brazil’s literatura de cordel in their entirety comprise a valid and important alternative source for Brazilian history in the twentieth century – not that they are history, but that they are invaluable for the learned historian as one of many sources to write history. The idea is based on Pedro Calmon’s seminal História do Brasil na Poesia do Povo (1929) and a reading of  E.  Bradford Burns’ and Thomas Skidmore’s classics on Brazilian history.  The book was favorably reviewed in Veja and literary supplements in São Paulo and Brasília.

Each chapter of the book represents a phase of Brazilian history.  It starts with the Old Republic and then continues with  the revolutionary 1920s, the Vargas epoch, the democratic interim of 1954-1964, the military period from 1964 to 1985, and the return to chaotic normalcy in the present.  Each chapter begins with an introduction summarizing “the official story” and is followed by cordel’s version of the same with excerpts from texts and Curran’s commentary.  The poetry of cordel is seen in effect as “popular history” for its public.

Highlights are many: the War of Canudos of 1896-1897 (the same reported by Euclides da Cunha in his Rebellion in the Backlands), the saga of northeastern banditry with Antônio Silvino , Lampião and Maria Bonita, Getúlio Vargas’ national odyssey from the “New State” to workers’ democracy, Juscelino Kubitshek’s utopic Brasília, Jânio Quadros’ eccentric experiments and failures, Jango Goulart’s attempt at social reforms, the Generals who protected freedom by squelching it, Tancredo Neves as messianic savior, José Sarney’s deputizing of the masses, Collor de Mello’s debacle, and Fernando Henrique Cardoso’s real.

The book is richly illustrated with covers of important booklets from cordel, from the photo-clichê style to the folk woodcut.  In addition, there is a “Gallery of Poets of Cordel,” color slides reproduced from Professor Curran’s collection covering over thirty years of cordel.  Footnotes and a list of over three hundred titles of poems consulted complete the offering.