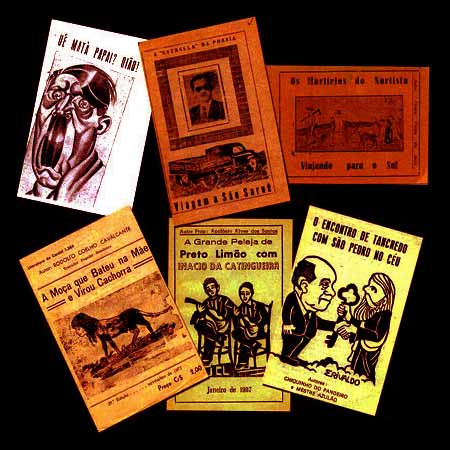 This anthology of the "cordel" story-poems is intended primarily for an English speaking audience.  The author knows of no other such endeavor.  It introduces the "cordel" to this new public in an informative introduction.  The anthology itself has as its inspiration Curran’s much larger "Portrait of Brazil in Cordel" [Retrato do Brasil em Cordel] published in 2011 by Ateliê Publishing House in São Paulo, Brazil.  It thus envisions the "cordel" as a folk-popular Brazilian Epic, and provides a sampling of "cordel" in its ten story-poems.

"Debate of the Protestant Preacher with Master Vulture."
[Religion in Brazil]

"The Encounter of Tancredo with St.Peter in Heaven"
[Brazilian politics and economics in its history]

Buy this Book:
Copies of this book are available for sale at trafford.com and amazon.com.