Brazil's "literatura de cordel" is folk-popular poetry (meaning from both the oral and written traditions) which thrived in Northeastern Brazil for most of the twentieth century. After a hiatus of some years when its production fell significantly due to economic and social change in Brazil, it is experiencing a revival due primarily to the personal computer and printer which allow poets to bypass the high cost of typographies and printing shops. There is in addition a large presence of "cordel" type poetry on the internet. 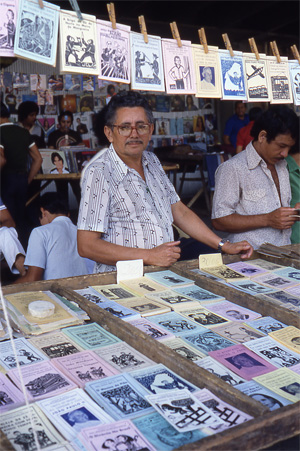 "Cordel" was originally written by humble backlands poets or urban poets, most with very limited formal schooling but with the "gift" of verse. The pioneers of "cordel" were from the northeastern states of Paraíba and Pernambuco, and many were steeped in the oral tradition of the "cantador" or improviser of oral verse in the northeastern poetic duel. The poets created their stories in verse, generally in six or seven-line strophes with xaxaxa rhyme and took them to the local printing shops.

The shops printed the poems in chapbooks of 8, 16 or 32 pages, illustrated the covers with decorative type until the 1920s, postcard scenes and pictures of Hollywood movie stars from the 1930s to the 1950s, and most recently and most commonly, folk woodcuts. The poet received a share of the printed copies and sold the story-poems called "folhetes, folhetos, livro de feira" or other names in the local country fair on weekly market day and in city markets throughout the Northeast. He would set up a stand displaying the booklets of verse and then sing or recite them to an avid public.

The center for "cordel" became Recife, Pernambuco, with poets and their "agents" traveling to most of the towns in the northeast interior to sell the verse. But because the Northeast was plagued by drought and economic hardship, the poets migrated along with millions of others to the Amazon Basin, the cities of Rio de Janeiro and São Paulo, and finally to the new capital of Brasília. Thus "cordel" became known throughout a large part of Brazil and represents the best of the Brazilian folk-popular tradition.

Today in the early part of the 21st century, cordelian authors now may be more urban, living in large cities in the Northeast as well as in São Paulo or Rio, may be from the middle class, and may have college degrees. Topics are more urban, language is more contemporary, but in many cases the new poets still respect and obey the old traditions in regard to topic, title and language. And many poets write poetry and distribute it through the Internet, although most of these story-poems never get into print.

There are three major types of cordelian poems:

"Traditional" popular themes, largely in a fiction mode, dealing with fairy tales, love and adventure or religious themes. The largest number of poems in old "traditional""cordel" are in this mode.

Non-fiction (in large part) story-poems which report all manner of current events from the local to the national to the international.

Because of the latter (n. 3) "cordel" became known as the "newspaper" in verse of the poor of northeastern Brazil and its poet "the voice of the people." The current event story of 8 pages in length became known as the main link in communication between the national media and its "recodification" in the people's newspaper in verse.