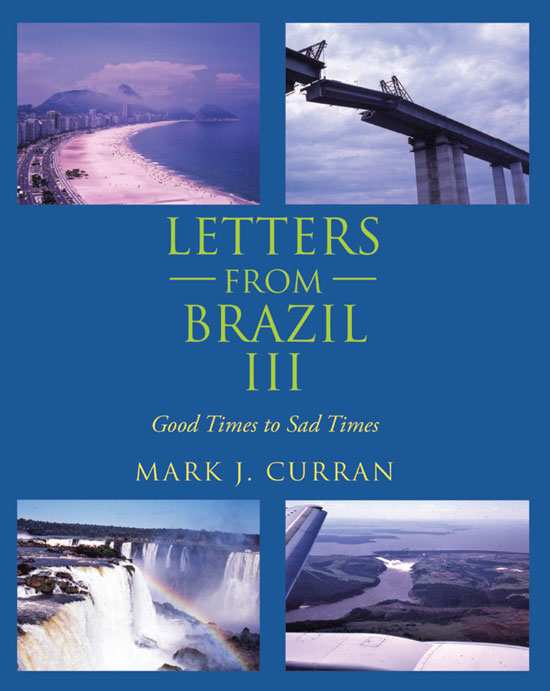 Letters from Brazil III is a continuation of Professor Mike Gaherty’s adventures in Brazil. It chronicles in fiction Mike’s initiation into the Portuguese-Brazilian academic world in the milieu of a major international “congress.”The academic affair is followed by Mike’s friendship and involvement with singer-composer Chico Buarque de Hollanda, the reporting for the New York Times of his songs jousting with Brazil’s “prior censorship” board, and Mike’s participation in one of Chico’s LP’s and successive concerts in Sao Paulo and Rio. The latter experience becomes dicey and dangerous with interference, surprising cooperation and then bad times with the military regime’s enforcement agency - the “Department of Public Security.” Mike, still a bachelor, is entertained and then becomes enmeshed in fun times turned complicated with beautiful “carioca” women.

Mark Curran is a retired professor from Arizona State University where he worked from 1968 to 2011, teaching Spanish and Portuguese and their respective cultures. His research specialty was Brazil and its “popular poetry in verse” or the “Literatura de Cordel,”and he has published many articles in research reviews and now some sixteen books related to the “Cordel” in Brazil, Spain, and the United States. Other books are either of an autobiographical nature - “The Farm” or “Coming of Age with the Jesuits” - or reflect classes taught at A.S.U. The latter are in the series “Stories I Told My Students:” books on Brazil, Colombia, Guatemala, Mexico, Portugal and Spain. “Letters from Brazil I and II” are experiments combining reporting and fiction. “A Professor Takes to the Sea I and II” is a chronicle of a retirement adventure with Lindblad Expeditions on the National Geographic Explorer Ship. “A Rural Odyssey” is a work of fiction based on “The Farm” and, finally, “Letters from Brazil III,” now, is a continuation of that series.