Cordel celebrates one hundred years of existence as we arrive at  the year 2000.  The oldest story-poems were printed in the 1890s, and the first major national event registered in cordel was the War of Canudos in 1896, the national tragedy when the Brazilian Army decimated the poor backlanders and their leader Antônio Conselheiro in the backlands of Bahia.  The great pioneering poets of cordel, Leandro Gomes de Barros, Francisco das Chagas Batista, João Melchíades Ferreira da Silva and others wrote in the first decades of the century. 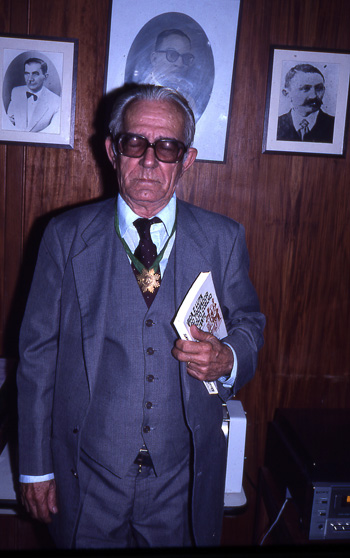 João Martins de Atayde then created the “heyday” of cordelian production with a stable of writers in Recife, Pernambuco, from the late 1920s to the 1950s.  Atayde’s stock plus that of Leandro Gomes de Barros bought by  Atayde from the poet’s widow in 1921 were moved to Juazeiro do Norte, Ceará, in the late 1950s when José Bernardo da Silva continued the tradition.  So the city of Father Cícero also had its day in the sun.

Another generation continued strong through the 1960s.  Cordel then began to diminish seriously because of the availability of the transistor radio, then television, then color television, the high cost of producing cordelian stories, and the lack of buying power by its traditional public.  Local fairs diminished and vanished, but mainly, Brazil modernized and cordel no longer served as the main entertainment and news medium it was formerly for the humble class of the Northeast.

But a mini-revival took place in the 1970s and 1980s spurred on by intellectual interest when universities were encouraged to have cordel represented in their curricula.  High school and grade school teachers were encouraged to teach cordel so that young Brazilians would know of this important part of the national heritage.  An additional stimulus for cordel was the sale of woodcuts alongside the cordelian stories in the marketplaces with the result that even foreign tourists with little knowledge of Portuguese could buy and take Northeastern folk art home in the form of prints and folhetos de cordel.  The saga of the battle for a return to democracy after twenty-one years of dictatorship, the “Direct Elections Campaign,” and the personal quest of President-elect Tancredo Neves gave cordel a huge revival from 1983 to 1985.  The return to democracy and the usual jousting of presidential hopefuls kept things lively through the election of Collor de Mello and his dramatic impeachment in the early 1990's.

"Cordel" continues today with the changes noted previously: some veteran poets and woodcut artists such as José Costa Leite, J. Borges and Abraão Batista continue in the Northeast and Gonçalo Ferreira da Silva in Rio.  But a new generation of poets is writing today, among them second generation poets like the very successful Marcelo Soares, son of the "reporter of "Cordel" José Soares in Pernambuco.  These poets, many from the middle class, many with college degrees and most living in urban areas continue the old themes and format writing their story-poems on the computer and printing them on the printer at its side.  And a whole new phenomenon—cordel on the internet, is important in today's highly developed electronic media oriented Brazil.  Gustavo Dourado is one of the most prominent of the "internautas" employing themes and format of the old "cordel" although most internet poems do not arrive in print.

But as we have said in previous publications, whatever may be the main role of cordel today, one can be grateful that it is preserved in the national archives as an important and irreplaceable part of the national folk-popular heritage.  The Rui Barbosa Foundation in Rio de Janeiro, the Institute of Brazilian Studies in São Paulo, the university collections in Paraíba, Ceará, Pernambuco (and others) plus several private collections provide the greater part of access to cordel today.  A recent and very ambitious program by Hedra Publishing House in São Paulo has plans for fifty monographs on the best of cordelian poets by recognized scholars in the field; may it come to fruition.

Cordel in the thousands of poems in the archives is truly an encyclopedia in verse of a rich, northeastern folk-literary past, of Brazilian social mores, and the minor and major events of the twentieth century.  Through the poems ones sees “the vast universe” of cordel.  If one is industrious and persistent, he can still see glimpses of that universe in Brazil today.