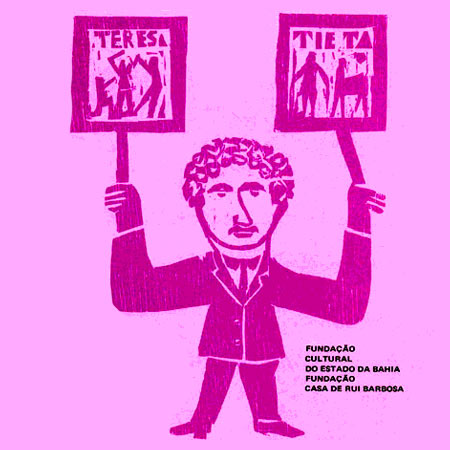 This monograph was published on the occasion of the celebration of fifty years of literature of Jorge Amado in Bahia in 1981.  Because it was part of the Amado celebration covered by television, national news magazines and Vargas Llosa for Peruvian television, Amado appeared at the book signing and Isto É included an article on Curran and the book in its feature article of that week’s issue.

The book is modest in size and specialized in scope, but is of value if one enjoys reading Jorge Amado, recognizes his role in Brazilian fiction and wants to see just one, small facet of his novelistic technique.  Its thesis derives from Amado’s own statement that his novels in large part owe a large debt to the humble masses [povo] and their own folk-popular culture and that he indeed is a “teller of stories” heard from the poor.

Amado was familiar with the cordelian stories in verse from the very beginning of his career and immortalized the Bahian poet Cuíca de Santo Amaro and later Rodolfo Coelho Cavalcante in successive editions of his guidebook and best seller Bahia de Todos os Santos, a must for any Portuguese speaking tourist in Salvador da Bahia.  More important, Amado recognized that both the themes and the narrative, heroic style of cordel were a good fit for his own storytelling, i.e. the ABC format of cordel, the archtypes among its protagonists, and the storyteller in verse himself, the poet of cordel, as both narrator and an important popular personage in the Northeast.  Curran’s book summarizes studies on the older novels and details Amado’s use of cordel in Os Pastores da Noite, his thesis novel Tenda dos Milagres and especially Teresa Batista Cansada de Guerra.

Buy this Book:
You can purchase this book on amazon.com