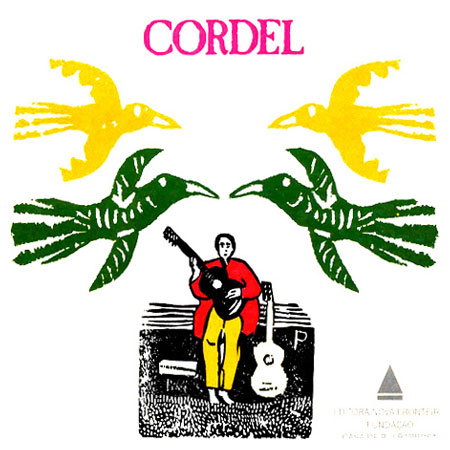 This lengthy book on perhaps the most visible poet and  publisher of modern cordel, Rodolfo Coelho Cavalcante, Alagoan but longtime resident of Salvador da Bahia, is simultaneously biography, anthology and analysis of RCC’s almost fifty year career production of cordel.  But it is more because through RCC’s role as propagandist of the poets and poetry of cordel since 1955, one in effect sees the evolution of the same during one-half of its existence in Brazil.

RCC was admired and criticized, loved and hated, but no one can deny his amazing production: self-proclaimed author of 1,700 titles in cordel.  He also as self-proclaimed leader of the “poetic” class defended the poets themselves and gave unheard of visibility to them through national congresses financed on a shoestring in Salvador da Bahia in 1955 and São Paulo in 1960.  He continued his mission after 1955 to popularize cordel as a tabloid journalist who for thirty years made known and defended cordel to Brazilians who were just beginning to recognize and appreciate its value.

RCC was colorful, dynamic and always looking to the future; his life and works are synthesized in this book.  The first chapters tell of his youth dealing with and escaping an alcoholic father and abuse at home, his adventures with small-town circuses in the Northeast backlands where he became the creator of circus melodramas, his fling at preaching the Protestant message, his conversion to Kardec spiritualism which guided the rest of his life, and his incipient career as poet of cordel.  Part One also treats the “fire” of his early mission to cleanse cordel of that minority of “immoral” chapbooks and organize congresses and national organizations to make it known and honorable.  Yet another chapter deals with his many tabloid-style newspapers which varied in content from self-aggrandizement to spiritualist message, to divulging the poetry and poets of cordel.

Part Two of the book deals with his immense production of poems in cordel.  One discovers his views on poetry as a personal “gift.”  An anthology of his poems (really excerpts from the same) reveals his major themes of religion, the moral “example,” homage and paid praise to famous personages in the community and nation, but mainly a political document of fifty years of Brazilian life.  Rodolfo documented Brazil from 1942 to 1986 -- the Integralist and Nazi threats of World War II, the Communist threat and the Cold War, and the national political chronicle from 1945 to his death in 1986.  He documented the ups and downs of the Vargas regime, the democratic chaos of  the Kubitschek, Quadros and Goulart regimes, the military dictatorships from 1964 to 1985, and the return to democracy via Tancredo Neves.  Fervently democratic and anti-communistic, his voice is the epitome of the conservative vision of modern Brazil, conservative in moral view and social mores as well as in politics.